The 3rd SMIBIO workshop was organized in the framework of the project ERANET-LAC “SMIBIO” (www.smibio.net) in cooperation with the Biotechnology Institute – Universidad Nacional Autónoma de México (IBt – UNAM).
The objective of the SMIBIO project is to develop small-scale integrated biorefinery units capable of processing different kinds of biomass produced in short radius catchments rural and small urban areas, both in Europe and in CELAC (Community of Latin American and Caribbean States).
The aim of this workshop was to present small-scale integrated biorefinery case studies (in Argentina, Chile, Mexico, Colombia, Portugal, Spain and Germany) developed within the SMIBIO project and discuss with stakeholders’ opportunities and challenges of small-scale biorefineries for rural development. A focus of the project is the analysis of possibilities of these biorefineries as a real strategy for developing bioeconomies in Latin America and Europe.

11:30 - Panel Discussion on opportunities and challenges for small-scale biorefineries in Latin America and Europe: Which feedstocks? 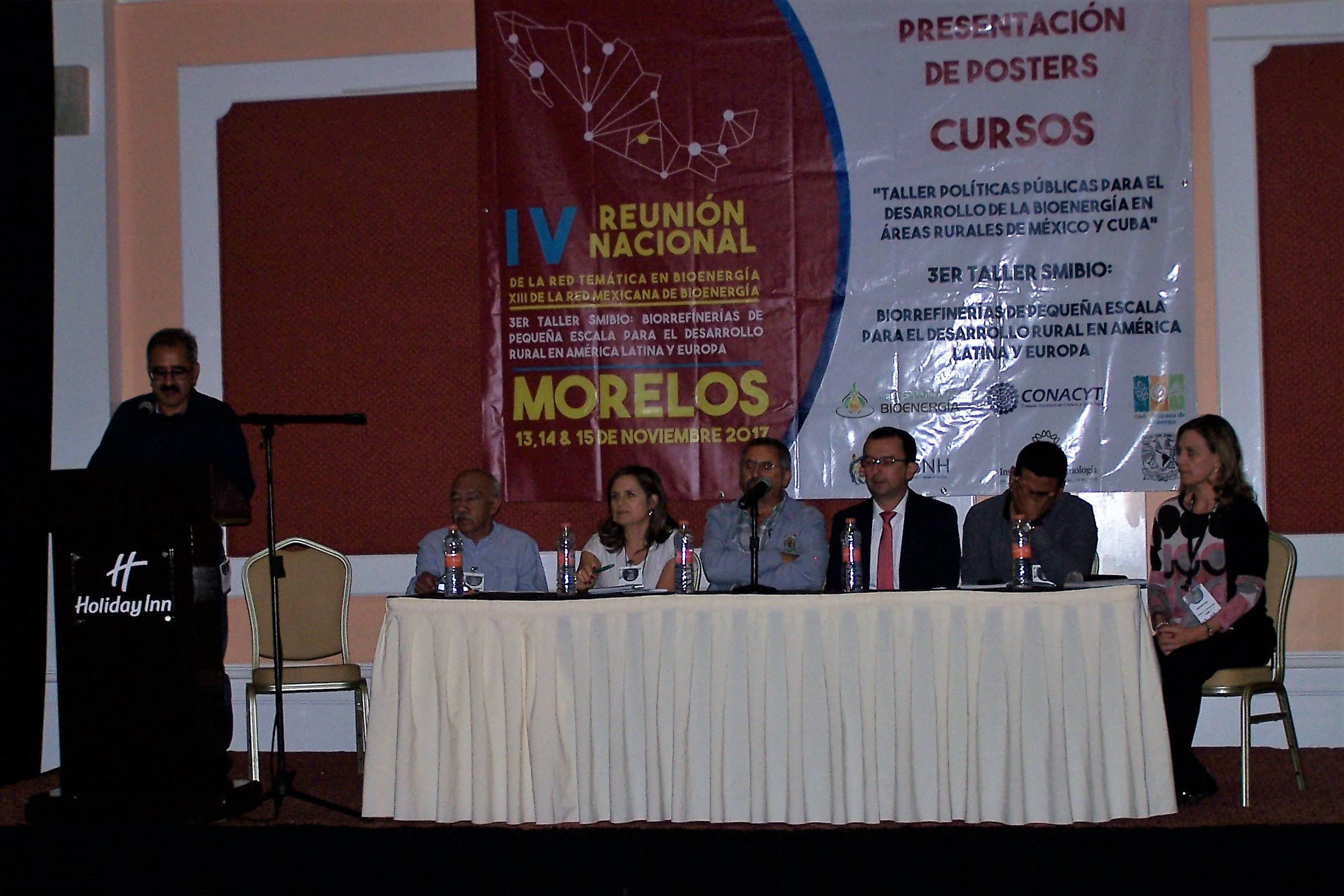 First, Agustin Castro from RTB answered to the question about the most favourite feedstock, that the use of corn as bioenergy feedstock is forbidden in Mexico because of food competitive use (i.e. Mexico needs to import 60 % of the corn consumed in the country). He sees the agave plant as promising bioenergy feedstock that could also be grown in more places in Mexico. Carlos Cardona from UNC told the audience that the two most important aspects for a better development of biorefineries are the dependence on state and industries. He mentioned that for example the Colombian coffee industry has a promising feedstock for the production of oil and antioxidants, the coffee plant residues, yet does not use this potential as good as possible. David Rios from IPICYT commented on Mexican feedstocks, that there are many with no food competitive use like jatropha or salicornia, which have to overcome mostly the challenges of logistics and quality. To foster the Mexican bioeconomy, David Rios calls for certain types of subsidies. Mercedes Ballesteros said that she sees good chances especially for small-scale biorefineries in Europe associated to the agro-food sector, as there is enough material to produce sustainable biofuels out of it. The panel then agreed that it is necessary to demystify bio feedstocks into good (2G) and bad (1G) feedstocks. In some cases, also 1G biofuels can be a sustainable solution. Carlos Cardona emphasized the need for a preliminary analysis. Leopoldo Ríos from UAC put the sustainability aspect in the focus, mentioning that a 1G feedstock like corn may be a problem yet sugar cane can be a sustainable solution in some Mexican regions. According to Mr. Ríos, from the Mexican agro-industry, more than 50 million tons of bio feedstock are available every year. He also mentioned that local algae that are toxic are available without raising the food or fuel discussion. In Mexico, more investigations about biorefineries are needed according to Mr. Ríos.
In the questions from the audience the questions of successful biorefineries in Latin America was raised. As success story from Latin America can be called the sugar industry, which can be recognized as biorefinery also. Mercedes Ballesteros answered to the last question about possible bio products (amount and costs) in Mexico that in the beginning, the feedstock analysis must stand. All other decisions can be made after this issue has been solved.

17:30 - Panel Discussion on the future of Biofuel Markets in Latin America and Europe 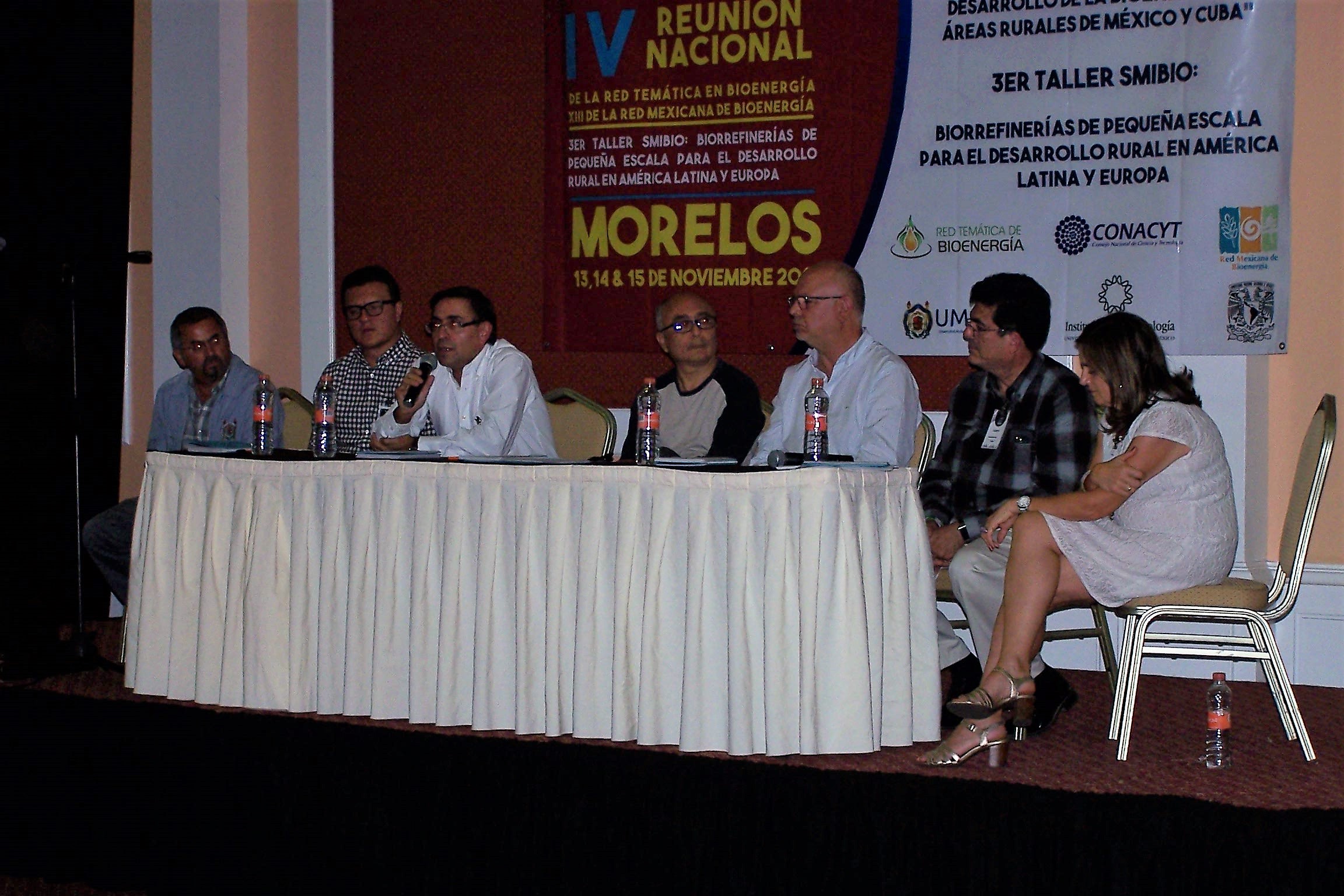 First Hector Ruíz from UAC was asked about his opinion on the chances of bioethanol in Mexico. He answered that the ethanol market in Brazil, compared with the Mexican market, is 23 years ahead. In his opinion the countries that did not have the “first generation” will probably hardly have the “second generation”. However, there is still a big potential for a market development in Mexico.
Then Francisco Gírio from LNEG was asked about his opinion on the European market, will biofuels or electric vehicles be the solution? Mr. Gírio said that the situation in the EU is complex and complicated, for example in France and Belgium 12% ethanol addition is envisaged. Finland likes to reach 20 % biofuels until 2020, and countries like Romania and Hungary plan to continue the production of 1G bioethanol. Then again, in Portugal e-mobility is supported a lot and biofuels are weaker there. Until 2030, Mr. Gírio still sees a good potential for both, for biofuels and for e-mobility. The question remains, at which level.
Then Luis Barahona from CONACYT was asked about the political aspect of the 8 % ethanol addition in Mexico while the gasoline price is at 16 cents per litre and bioethanol is much more expensive. Mr. Barahona said that the market for 1G bioethanol in Mexico is and will be stable until in the future more e-mobility is established. The most important factor for bioethanol in Mexico is the political regime in the form of PEMEX, which is setting the demand for ethanol as monopolist in the country. Regarding the Mexican biodiesel production, Mr. Barahona pointed out that there is a feedstock problem and thus plants like jatropha should get more support. Regarding bioethanol, Mr. Barahona said that the technology in Mexico exists, only regulation is missing.
After that, Mercedes Ballesteros asked Germán Aroca from PUCV about the sustainability aspects of biofuels in Chile. Germán Aroca emphasized the high potential of and the need for biofuels in the country as Chile is no petrol country yet has to import 60 % of the demanded energy (petroleum, natural gas and electricity). Until 2020, Chile has the target of 20 % renewables, with the long-term plan to export energy into the USDA and Argentina.
Agustin Castro then asked Luis Barahona about his view on the influence of the USA in Mexico. Mr. Barahona mentioned that Mexico can reduce the US influence. It needs to exploit more the existing solutions, like the 1G bioethanol from jatropha in Sonora, which can be repeated in many other regions. Mr. Barahona especially considers Baja California as high potential region.
The following questions from the audience revealed that in Mexico, simple solutions are not promising. Regarding feedstocks, the investors must investigate the potential on their own. The Mexican RED is trying to achieve incentives for biofuels in order to foster the producers. Francisco Gírio pointed out that sustainable biofuels (1G or 2G, both can be sustainable) are the only way to minimize the CO2-emissions of the mobility sector. Hector Ruíz added that the benefit for the market players is the decisive point. Luis Barahona mentioned that it is important to develop in the right direction, also in small steps. Finally, the question of a market for the feedstock residuals was raised. Germán Aroca answered this by giving the example from Brazil, where fertilizers worth of 5 million US$ are the residues of the local ethanol production. Agustin Castro concluded that everything that is not prohibited by law can be done in Mexico and that private initiatives already have had some success. Mercedes Ballesteros thanked the panellists and closed the panel. 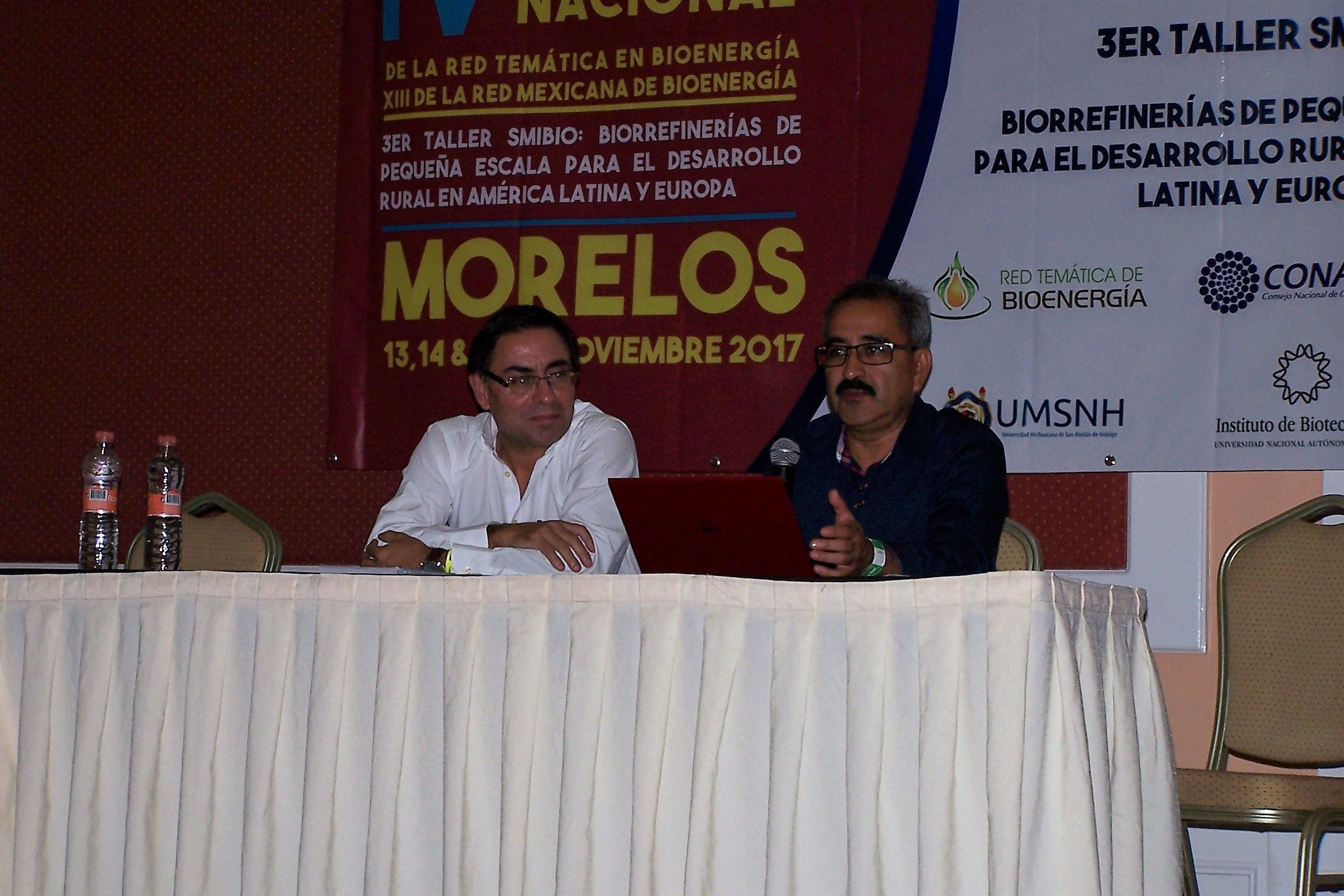 Francisco Gírio highlighted the good discussions of the workshop and the scientific, technologic and political topics handled in the two panel discussions. He mentioned the many Mexican experts in the field and the high potential in Mexico for biorefineries. Concluding, Francisco Gírio sees big opportunities for further cooperation. He thanked all contributors to the 3rd SMIBIO workshop.
The host and organizer of the workshop, Dr. Alfredo Martínez, emphasized the technical issues discussed in the workshop. He mentioned again the issue of small-scale biorefineries, that need to be addressed and investigated deeper and using scientific, technological and sustainability criteria. Furthermore, he mentioned the need to develop self-production of degradative enzymes in the frame of 2nd small-scale biorefineries, mainly to avoid a supply and economic dependence of this material from monopoly industries. Moreover, several modelling studies, from the economic and sustainability perspective, demonstrated that small-scale biorefineries are feasible in several Latin-American countries such as Colombia, Chile and Mexico, using local feedstocks. Also, the question of the best feedstock, from the sustainable point of view, needs to be investigated in more detail in Mexico, including fast growth grasses as potential feedstocks. The Spanish CLAMBER project was recognized as an inspiring strategy and similar projects, at smaller scale, can help to develop biorefineries in Mexico and to provide support to national and international companies with scale-up services. Last, Dr. Martínez pointed out that laws and regulations are crucial issues that need to be worked on continuously to support the development of small or large-scale biorefineries to produce biofuels and biochemicals that can be used as building blocks in the chemical industry.

Francisco Gírio thanked again RED and REMBIO for the possibility to integrate the workshop into the conference programme and then officially closed the 3rd SMIBIO workshop.