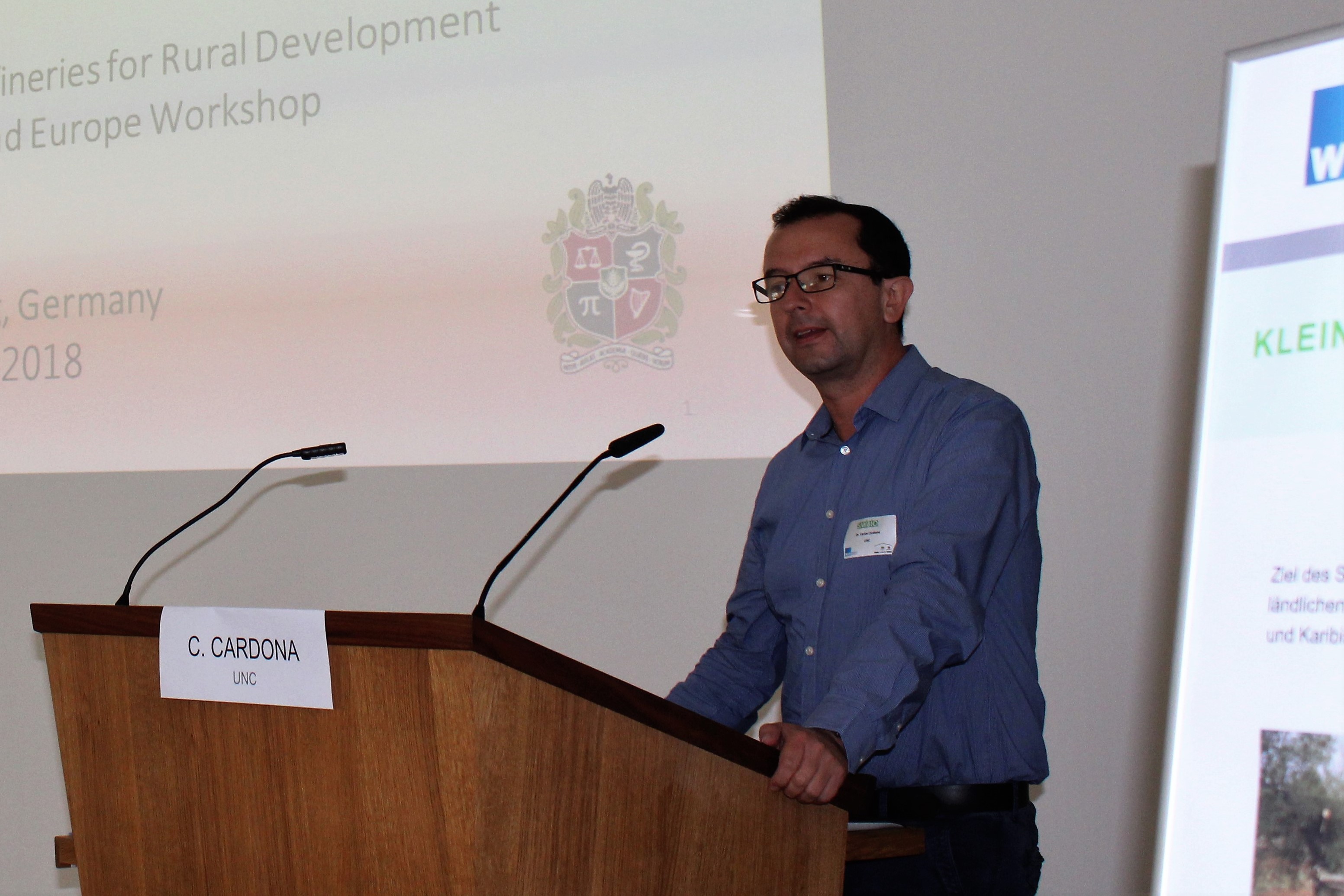 Carlos Cardona (UNC, Colombia) during his speech at the 4th SMIBIO workshop

The next presentation of Carlos Cardona, Professor of Chemical Engineering at the National University of Colombia at Manizales was about the potential of small-scale biorefineries in tropical countries.
Starting, Mr. Cardona gave an introduction about the context of bioeconomy, pointing out that future potential biorefineries must be sustainable biorefineries, considering economic, environmental and social (i.e. food security) impacts and also technical aspects. A thorough analysis before going into detailed planning is absolutely mandatory when the implementation shall be successful. Especially, a comprehensive analysis of the scale is important to find out whether small or large scale must be chosen to achieve the best economic performance.
It is interesting to know that despite the need to decide for a different scale, no definition of small-scale is in place for biorefineries. Mr. Cardona thus defined the scale of a biorefinery with regards to the processing scale (amount of raw material processed in a period) versus the production scale (amount of product obtained in a period). He mentioned also that these scales can be ambiguous when for example the amount of aimed product in the feedstock is low (small-scale) while at the same time a high amount of feedstock needs to be processed (large-scale). According to Mr. Cardona, small-scale biorefineries are affected by external factors like governmental policies, environmental considerations, market conditions and also transportation and distribution costs. He showed the participants then a technical approach in six-steps to define the optimum scale.
Then, Mr. Cardona presented the case study of the plantain pseudostem and plantain peel.
The plantain pseudostem shall be used as feedstock for the production of sugars to obtain other added-value products. The feedstock occurs in considerable amounts in Colombia, for example in 2014, 7.3 million tons of plantain pseudostem were produced. Plantain peel represents 30% to 40% of the total fruit weight. The main applications aimed for are starch extraction for the food industry, extraction of phenolic compounds and antioxidants. Mr Cardona then showed the planned biorefinery concepts for both biorefineries and explained in detail the processes occurring in the plants. In the plantain pseudostem biorefinery, bioethanol, biogas, electricity and steam shall be produced. In the plantain peel biorefinery, bioethanol, electricity and steam and biomethane are the aimed products. Continuing, Mr Cardona presented an economic assessment for both biorefinery concepts. For each biorefinery concept, a low scale and a high scale scenario was shown with the related economic consequences, resulting that a low scale scenario is not economical viable. The most economical viable scenario was shown for a plant capacity of 4,000 tons per day. An environmental assessment completed the case study overview.
Coming to the end of his presentation, Mr. Cardona revealed a new definition for the scale issue, the Minimum Processing Scale for Economic Feasibility (MOSEF): Minimum scale of processing the raw material at which a process achieves a feasible economic performance (NPV=0 during the lifetime of the project). He presented then an applied example on the case of a cocoyam (tropical plant from West Africa, Asia and Oceania)-based biorefinery and of an Andean Blackberry-based biorefinery.
Finishing, Mr. Cardona pointed out that the knowledge based strategy is the only way to provide real information that can be used for decision making. He expects that in the coming years an increased growth can be seen, depending on the oil price level. The biggest challenge for biorefineries in his opinion is the low maturity that needs to be overcome.