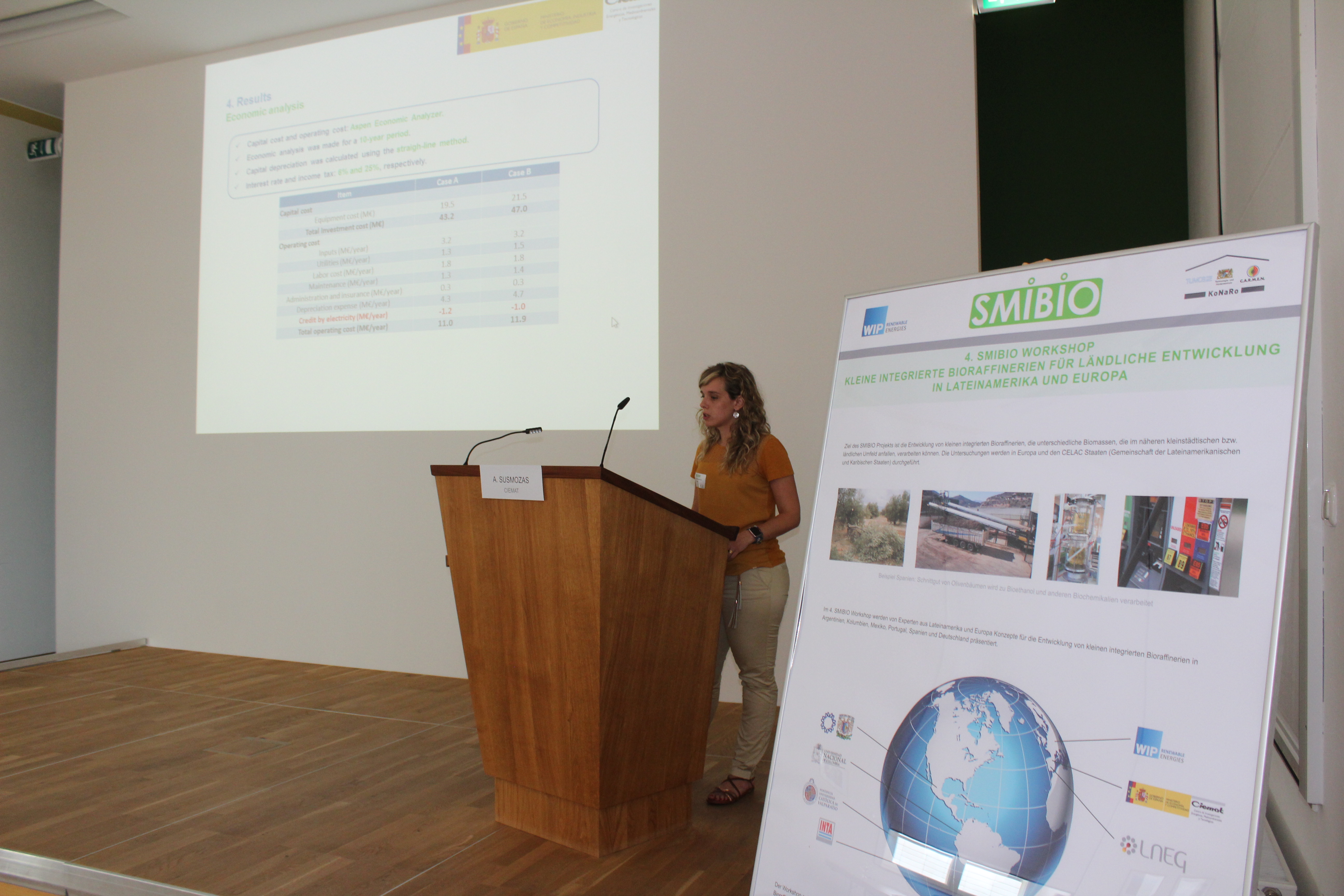 The last presentation of the 4th SMIBIO workshop was given by Ana Isabel Susmozas, PhD researcher at CIEMAT, Spain. She presented a case study about the use of residues of the olive oil industry in a biorefinery. The residue intended for use is the olive tree pruning (OTP) biomass, which is abundantly available in Andalusia, in the South of Spain, with 3.5 million tons OTP obtained per year. Nowadays, OTP is usually burned and left on-site, which produces greenhouse gases and could led to diseases propagation. As an alternative it can be used as feedstock for a biorefinery process, producing bioproducts and biofuels. In the main interest for biorefining are the large amounts of extractives compounds. Some of these compounds (like mannitol, sugars or antioxidants) could be interesting for the food and pharmaceutical industries. If the extractive compounds are also recovered, thus a better economic performance can be achieved.
In the study, two scenarios were compared, one case, in which antioxidants, ethanol and heat and power are produced, and another case, in which antioxidants, ethanol, xylitol and heat and power are produced. The two cases were simulated for a plant capacity of 40,000 tons per year, using the ASPEN Plus software together with bench-scale experimental results. Furthermore, an economic analysis and a life cycle assessment were carried out for the two scenarios. Ms Susmozas presented the results and revealed that the combined production of antioxidants, ethanol, Xylitol and heat and power is economical more viable.  Moreover, comparing the environmental profile of both cases per one euro of profit, the combined production of antioxidants, ethanol, Xylitol and heat and power also has a better environmental performance than the scenario without xylitol production.
Concluding, Ms. Susmozas summarized that olive tree pruning (OTP) biomass is a promising feedstock for biorefinery processes since it is an abundant, cheap and available resource that can be used for production of biofuels (ethanol) and valuable compounds (antioxidants and sugars). The simulation results demonstrate the technical feasibility to obtain bioethanol alongside bioproducts (antioxidants and xylitol) at small scale. The depreciation expense and inputs cost of OTP biomass were identified as the main contributors to the operating cost. Enzyme also contributes significantly. The economic analysis of the biorefinery systems show a positive Net Present Value (NPV) for both cases, with better results when xylitol is also produced. The LCA study shows that the enzyme production dominates most of the impact categories. A better environmental behaviour is obtained when xylitol is also produced.