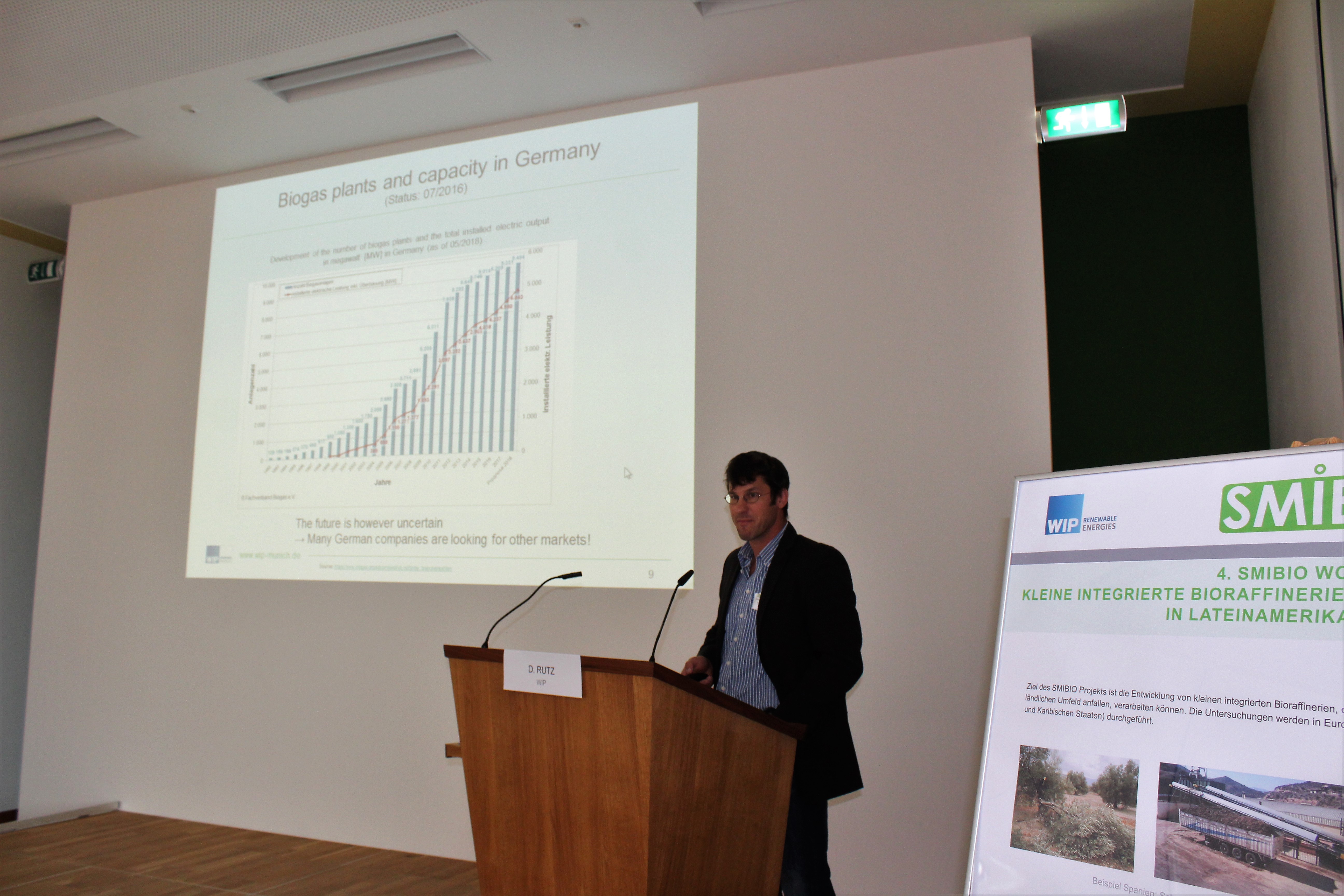 Dominik Rutz (WIP, Germany) spoke about the role of anaerobic digestion in biorefineries

Dominik Rutz, Senior Project Manager and Head of Unit Bioenergy & Bioeconomy at WIP Renewable Energies, gave the next presentation about the role of Anaerobic Digestion in Biorefineries.
Mr Rutz started his presentation with some facts about the company WIP Renewable Energies. Then, he spoke about the background and the current policy developments of renewable energies in Germany. He stressed out that already now we should aim for 100 % renewable energies, not only in the long-term.
Mr Rutz continued his presentation with information about the German biogas sector which is by far the biggest in the world. Then, the different biogas systems were presented. Mr Rutz distinguished between agricultural biogas, biogas from waste and biomethane and showed an example of a typical Bavarian biogas plant which has an average size of ~500 kWel and uses the biogas mainly for electricity generation. The main feedstock for agricultural biogas plants in Germany is corn silage, but most plants co-digest it with other feedstocks, such as grass silage, manure, waste, etc. . It is estimated that between 40% and 50% of the feedstock of biogas in Germany is corn silage. About 40% of the corn production in Germany is used in the biogas sector and about 60% is used for feed. This was mentioned, as a discussion on the use of food crops for energy purposes arose.
After the detailed biogas market overview, Mr Rutz spoke about the “why” for biogas. To the benefits of biogas production, he counted the flexibility of the systems, the mature technology, the possibility to balance the power grid and the ability of sector coupling (i.e. power, heat and transport). Furthermore, AD can be an integrated part of a biorefinery.
He finished his presentation with several examples and different approaches of the biogas sector. Concluding, Mr Rutz stated that bioenergy development in Germany is largely influenced by German and European legislation. Although the path for the complete energy transition has been prepared for electricity, the fields of efficiency and renewable heat still need to be pushed. The biogas sector is an important technology in Germany with more than 9,000 AD plants and many companies (SMEs) were set up to provide technologies. However, as the political framework for biomass use is getting less favorable in Germany, companies must look for export markets. The most important point regarding the workshop is, that biogas/AD is a perfect stand-alone technology and even better for the inclusion in a biorefinery.